Engineering is a demanding program, but it is possible to combine study and sports. Acadia offers opportunity for student athletes both at the intramural and varsity levels. Here's a some testamonials from recent students: 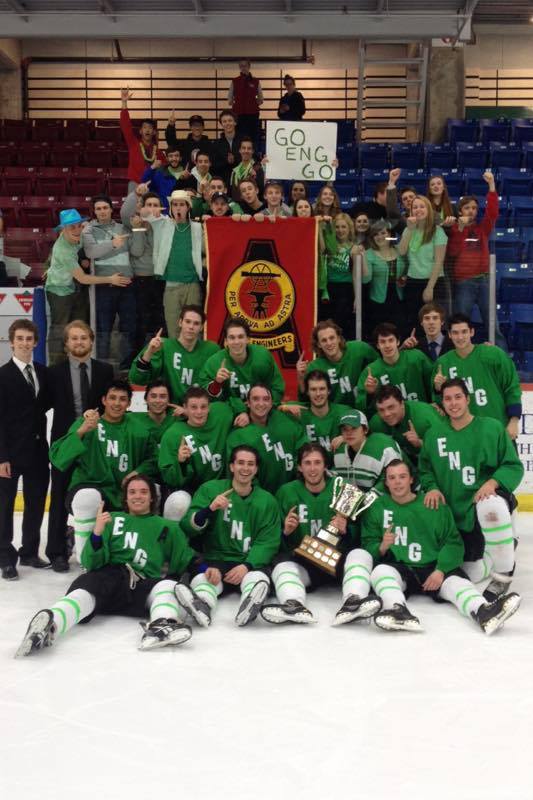 This year we created an Engineering vs Biology hockey game, a rivalry which began with an exciting 5-4 win for the Engineers. The game and its celebration boosted Engineering pride by bringing players, coaches and fans together from all years and backgrounds, and raising over $300 for charity. We look forward to build on this event for years to come.

Kirsti Mason is a 19-year-old ringette player from Cole Harbour, Nova Scotia. She has been playing ringette for 15 years and is currently the captain of the Nova Scotia AAA ringette team who will be competing at the 2015 Canada Winter Games. This February will be her second time at the Canada Winter Games. Four years ago at the 2011 Canada Winter Games in Halifax, she was the youngest member of the ringette team.  Other accomplishments of Kirsti's include winning the 2012 U19 World Ringette Championships as a member of the Junior National Team, Canada East. Kirsti was recently inducted into the Ringette Hall of Fame along with Team Canada East for their victory over Finland to reclaim the World Championship title. Kirsti gives back to ringette by coaching various levels and associations in Nova Scotia. She is currently the President of the Acadia Ringette Club and President of the Acadia Engineering Society. Kirsti is studying Environmental Engineering at Acadia University and will be continuing her studies at Dalhousie next year.

I've really enjoyed playing rugby while in engineering at Acadia."

A Word from the Hockey Player

“Although studying engineering can be time consuming, having the opportunity to play hockey somehow made managing the program a lot less stressful. My advice to anyone considering Acadia for engineering would be to join a club or sport while you’re here.  Remember to make time to experience the other aspects Acadia has to offer. I couldn’t have chosen a better school to start my engineering studies at and still be able to competitively play a sport I love.” 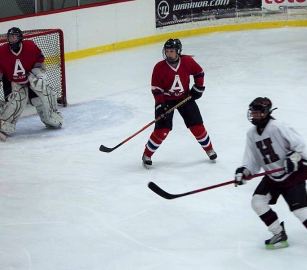 A Word from the Football Coach

“As Head football coach at Acadia, we have had a number of student/athletes who have received their diploma, played varsity football and have gone on to bright successful careers. It is a balancing act that has been accomplished by some great players and even better students. We hope to continue our relationship with the Ivan Curry School of Engineering and believe that there are many more great stories to be told.”
- Jeff Cummins
Head Football Coach

Football - A Word from the players

“It's tough, but it's easy to work around.”
- Sean Adamson
2nd Year CAS Student

Football - Letter From a Parent

"Once our son has decided which avenue of engineering he is going to pursue, and it is looking like either Mechanical or Electrical, he will map out the rest of his next 2 years.  Then he'll go in to meet with you and organize his football terms to make them more manageable.  It was quite a challenge for him.  He is up for the challenge though, but certainly had a few tense moments with time limits and full schedules.  He is learning a lot and Acadia is the perfect place for him.  I think he would be lost trying to play a sport and be in Engineering at a bigger university.

The support he has received from his team has been really great. They understand his work load and have worked with him to help him deal with it.  We have friends with kids in football programs at other universities who don’t support academics as much.  Jeff, his coach, is an amazing guy and our son is lucky to be a part of his program."

"Anybody who is involved in Varsity Athletics knows how much time and commitment their sport requires of them.  From the early morning practices at 6:00am before school to the dreaded double morning - evening workout days, competitive swimming is truly a sport of dedicated champions.

Engineering, like swimming, is known as one of the toughest, work-heavy programs in University.  Most people would think that combining these two lifestyles would be chaotic, but it is actually pretty fun and rewarding.  I have swam competitively my entire life, and I love the sport.  I also have a great passion for Engineering.  I made the decision not to give one up for the other, and with good time mangement and dedication, it is more than possible to enjoy your passions within the classroom and outside of the classroom!"
-Ben Corkum CAS Student

"To say the least, stressful and exhausting. Both academics and athletics take up a lot of time but I wouldn't trade it for the world!"
-Patrick Hengar Currently Student in CAS

"Being in engineering and on the varsity swim team has been challenging, mostly due to the time commitment of both. The training schedule is every weekday night for 2 hours, along with Monday and Friday morning for an hour and a half, dry land training for an hour Tuesday and Thursday, and three hours Saturday mornings. Having six courses (usually with labs) on top of this took up a huge amount of time. That being said, being on the swim team forced me to manage my time well, and work quickly on assignments and other work. While balancing athletics and academics was challenging, it has been a valuable experience."
-Taylor Lawson CAS

“Contrary to what most people think, playing on the Volleyball team made my academic life less stressful. I enjoy the structure my team’s schedule provides – it makes it obvious when I have to focus on my schoolwork which has helped my time management skills.

My team is an immediate support group. We practice/train once or twice a day and I benefit from my teammates’ energy. Being with a group of people who push themselves on the court and also academically, is very beneficial and helps me raise my standards.  I definitely recommend playing on a varsity team or joining a club while in the Engineering program.”